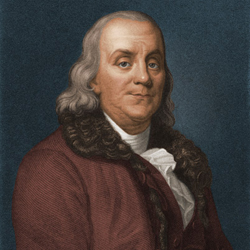 We are constantly urging people to write a will so that their wishes will be known when they die.  Family members won’t have to guess what they wanted to happen to their favorite possessions – their paintings, jewelry and digital assets.  Most bequests are fairly common but some aren’t.

Here are 5 strange bequests made by famous people.

1.  Benjamin Franklin – Don’t Let My Daughter Wear Jewelry.
Benjamin Franklin, suffered from obesity for many years and it’s believed that this contributed to his death. He died of pleurisy, an inflammation of the lining of the lungs, at the age of 84.

When his will was read a surprising clause was found. Among his final wishes, he asked that his daughter, Sarah, “not engage the expensive, vain and useless pastime of wearing jewels”.

The reason for this strange request was actually quite simple. Franklin also left a portrait to his daughter, which he had received as a gift while he was an ambassador to France. The painting depicted King Louis XVI and the elaborate frame was studded with 408 glittering diamonds. Franklin left the request to prevent his daughter from removing the diamonds to make jewelry.

2.  Janis Joplin – Throw A Giant Party.
Janis Joplin lived such a huge life but in the end, she paid the ultimate price for her hard living. She was discovered dead in a hotel room on October 4th, 1970, the victim of a heroin overdose at just 27.  Throughout her wildly successful career, Janis had struggled with addiction and alcoholism.

Janis loved to party so much in life that in her will she made provision for a posthumous all night party to be held after her death. She left $2,500 for her 200 favorite friends – including her road manager, tattoo artist, sister and fiancé to party it up, one last time, in her honor. The party was held at the Lion’s Share, in San Anselmo, California on October 26th, 1970.

3.  Marilyn Monroe – We Needed More Details.
When the blonde bombshell passed away in 1962 she didn’t leave a very detailed will and it ended up having a huge effect on how her possessions were distributed. Or rather, not distributed.

Instead of a comprehensive last will and testament Marilyn left all of her belongings, including clothes and shoes, to her acting coach Lee Strasberg, on the understanding that he would divide them among her family and friends.  Strasberg, who is remembered as the father of the method acting technique, never gave away a single item and instead stored everything in a warehouse where it remained for the next 36 years. When Strasberg died at the age of 80 his widow auctioned Marilyn’s belongings for $13.4 million!

Surprisingly Shakespeare all but excluded his wife, Anne Hathaway, from his will instead leaving the bulk of his sizable estate to his eldest daughter, Susanna. There was a provision that she, in turn, would pass it down, intact, to her first born son. Sadly his direct line died out in 1670.

To his wife he left his “second best bed”.  This request was separate from the will, tacked on as if it were just an afterthought. At this time, leaving someone a good quality bed was far from unusual but some scholars do think this could have been meant as an insult.

5.  Farrah Fawcett – Long Time Lover Gets Nothing, It Goes To Another Ex.
Farrah Fawcett will always be remembered for her role in the original Charlie’s Angels TV series and for the infamous red swimsuit that she posed in for a pin-up poster which went on to become the best-selling pin-up poster in history.

Farrah died in 2009 after a long battle with cancer.  Her longtime partner Ryan O’Neal was surprised to find that he had been left out of her will completely. They had been together for 18 years but had broken up before she died.  She instead chose to leave most of her estate to her son. To add insult to injury she also requested that another ex-lover be given $100,000.

Don’t be like these celebrities.  Spell out what you want to have happen to your belongings.  To avoid misunderstandings or possible court battles, explain what you’ve done if you think it will raise questions from your heirs…or those who have been left out.

To find helpful information about estate planning and writing wills, go to www.diesmart.com.