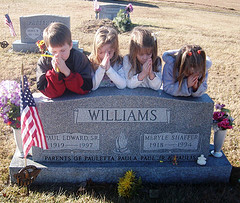 Just when family and friends are dealing with the emotional grief associated with a death, a family member or friend will have to assume the responsibility for making tough decisions regarding the disposition of the body and planning funeral or memorial services.  The decisions are especially difficult if the death occurred unexpectedly or the subject of how to dispose of the body and where to bury the remains was never discussed with the decedent and/or the family prior to death.

However, this  stress can be reduced if your funeral is planned in advance and your wishes are put into writing and communicated to family and or friends.  That way, they will know what you want and will be able to carry out your plans rather that trying to figure out what you might have decided.

Whether you are planning a funeral in advance or the funeral is being planned after your death, you probably have a general idea about the kind of funeral to have.  This idea is probably influenced by religious and cultural practices, family traditions and cost. But like many others, all the things that would once have been included in a traditional funeral may no longer be wanted; preference might be to have a celebration of life rather than a mourning of death.  Perhaps the choice  might be for  a ceremony that is personalized and unique to the person being honored.  There might be an unlimited budget for the funeral or most of the assets may be left to family, friends or charities leaving very little to spend on someone’s last big event.

Regardless of the ideas you have, there are several things that should be considered.  The links below will help you to think through these things and will help you to make the necessary decisions.