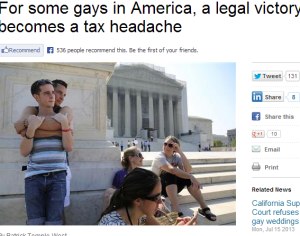 This week, Reuters published an article about a married California couple, Jeremy and Randy.   They don’t know how to report the business income Randy gets from Florida – a state that doesn’t recognize gay marriage.

The chief of the IRS, Danny Werfel, was quoted as saying that the IRS hopes to publish rules that will address issues like this one as soon as possible.  But there are more than 200 tax code references to marriage that have to be evaluated before this can happen.

Do you think the couple should get tax breaks based on income earned in a state that doesn’t recognize gay marriage?  Let us know what you think.